She brightened our week 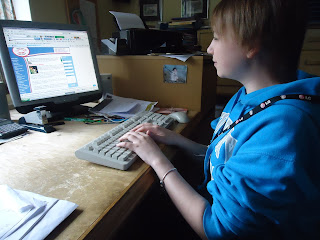 Paula Evans, a student at The University of Cumbria studying musical theatre and drama, joined us for a week's work experience last Sunday.
She travelled south from her home in Bolton, and  I had the pleasure of meeting her with her mum at Clevelands Guest House where she was to stay for the week.
As Paula was to be joining the actors with some very early morning starts, I eased her in gently on her first day in the office learning about the business.
Bonnie, our shih tzu, took to her immediately, so a good deal of learning was done whilst walking the dog.
During the next three days Paula accompanied the actors to schools in London and the Home Counties, and saw seven performances of four different plays, including "The Gingerbread Man" on which she wrote an interesting and useful review. She paid particular attention to the suitability for the intended ages ranging from two to seven, the ability of the actors in holding the attention of some very young audiences for fifty minutes, and the benefit derived from the theme of the play. All in all, I think we passed!
I am sure Paula enjoyed her time with "Aesop's Theatre", and I know we all loved having her with us.
This is what she wrote:-
"When I was given the chance to go on work experience with Aesop's Touring Theatre Company" I never thought I would be given the fantastic opportunity to get so involved, and feel part of the team.
I have learnt so much in such a short time, and have met some extraordinary and wonderful people along the way.
I have really enjoyed my time here, and feel it has been most beneficial in giving me the experience I needed and wanted, and hope I will get the amazing opportunity to work with them again in the near future.
Last, but not least, I would like to say a huge thank you to Albert  and Karen Brooks for accepting me, and to the other actors for making my time with "Aesop's" so enjoyable."
Thanks again Paula.
Bye for now,
Albert