Last time I told you about our two new actresses, Lana and Katherine, and now I am pleased to say they have done their first performance together - "World War II" at an independent school in Sunningdale.
The kids and teachers loved it, and were full of praise.
On Monday they are off to Southampton with "Aesop's Fables".
As I look out at the thickening clouds and watch the trees swaying, I am reminded summer is about over and we must prepare for the shorter days and cooler evenings. Still, not all gloom and doom, this is always our busy period with the run up to Christmas and we really enjoy the shows for the very young in December.
Remember, if you are thinking about a pantomime, why not consider the alternative of a fun-filled play for the nursery and infant children. We have four on offer, all perfect for the 2 to 7 age range. Just take a look at our website www.aesopstheatre.co.uk and pick one.
As I leave you now, take a look at our bright young actresses.
Until next time,
Albert x.....(not to be fooled with!) 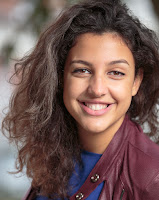 LANA
Posted by Albert Brooks at 13:03 No comments:

I hope you all had a wonderful summer, and enjoyed the hot August – so unusual – almost always wet and dismal!
Well, we have had the pleasure of auditioning two delightful new actresses.
Lana and Katherine have joined us and are really looking forward to entertaining and educating the children.
Bookings are coming in rapidly for our busiest spell up to Christmas, and we have added numerous new drama workshops to our repertoire of ten plays.
But let me tell you about some of the exciting happenings last term.
We had the pleasure of performing Drama Presentations on dinosaurs to some 2,500 children around and the Home Counties.
These were performed with the use of a 10 ft. T Rex Costume that moved and roared. We had Jade inside with a camera and fan to keep her cool. As soon as it was revealed, our audiences went into orbit! It was so realistic and, I have to admit, a little bit scary, particularly as it slept in my garage at home each night!
Just take a look below, and tell me what you think!
We also had the pleasure of performing at the Guildford Drama Festival in late July. There, at GLIVE we entertained the children with “The Gingerbread Man”.
Well, that’s enough for the time being: must get back to rehearsals.
Until the next time….. 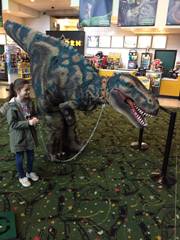 Posted by Albert Brooks at 17:08 No comments:

I really must try harder!

Was my last message way back in September last year? I cannot believe it.
Perhaps so much has happened that I have just not had the time. Well, that's my excuse!
What with the Queen's 90th birthday, the celebration of St. George and 400th anniversary of William Shakespeare, is it any wonder I have not had time to put pen to paper!
This year really did start off with a bang. All our new range of Drama Workshops are proving most popular, and there is a surge of interest in our environmental play "Robin Hood Rescues the Forest".
"Billy Beware!" has also been in demand. I guess folks are waking up to the fact that there is much said and done about "elf & safety", but so little of it relates to kids. Our production fills the gap nicely.
Not only is the play doing well, but we are also in demand for the book written by our Director and Principal Actress, Karen.
There was a time when I could add pictures but, sadly, I seem to have lost the knack. Either that or the blogging system I am using will not oblige.
Anyway, I am off to walk the dog, Bonnie, between showers. Hopefully, you may get to see her once the glitch has been resolved.
Until next time - not so long!
Albert
Posted by Albert at 17:08 No comments: